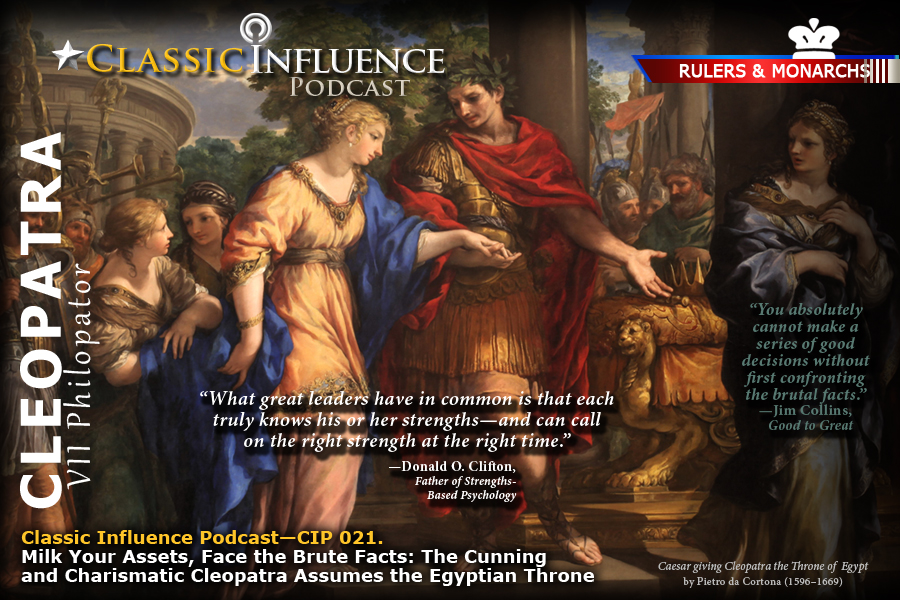 Swamped with political ambition and romantic intrigue, the saga of the ancient Egyptian pharaoh, Cleopatra VII, has captivated historians and storytellers throughout history, from Plutarch in ancient Greece, and Shakespeare in early 17th century England, to screenwriters in Hollywood to this day. Cleopatra remains one of the most famous female rulers in history. Often portrayed as a sexy femme fatale, however, Cleopatra was not the classic beauty that we’ve been made to believe. Rather it was her cunning and charisma, her savvy and self-belief that enabled Cleopatra to make her mark on the world. In this episode of the Classic Influence Podcast, we’ll explore how Cleopatra defied the political patriarchy of Egypt, outwitted her brother, Ptolemy XIII, and, ultimately, influenced the great Roman military and political leader, Julius Caesar, to be a faithful ally in full support of her ambition to rule the Egyptian empire. Grounded in modern management research, ancient military strategy, and the practical wisdom of the legendary 19th century showman, P.T. Barnum, this episode also reveals the vital necessity of dealing with difficult facts head on, and the power of maintaining a constant connection with the brutal truth, including the critical feedback you desperately need to succeed.