Take Bold Action (Part 4): To Achieve the Unbelievable, Back Bold Action with a Bastion and a Base: The Herculean Daring of Bloody Mary’s Fight for the Throne 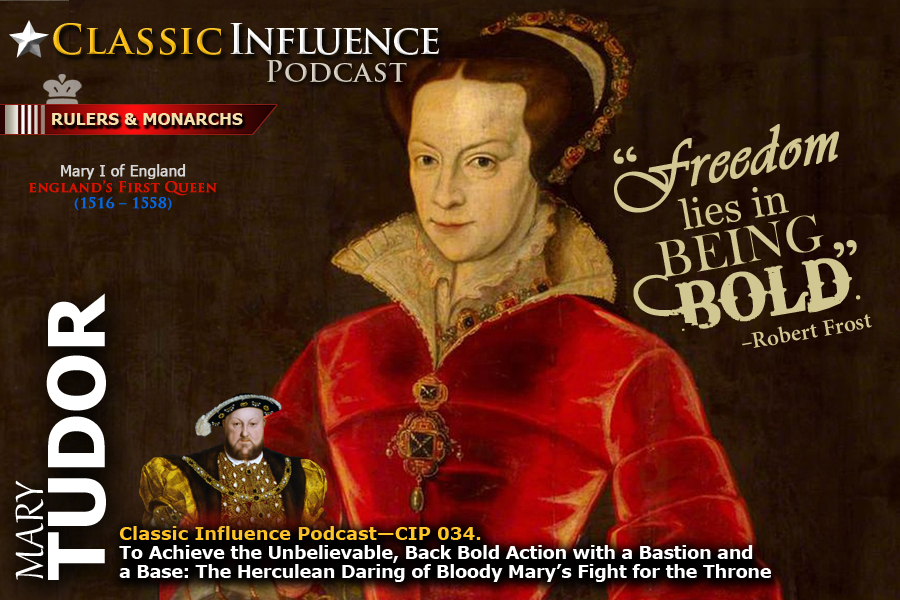 Mary Tudor, the eldest daughter of King Henry VIII, was born at the bloody center of the greatest religious and political upheaval in England’s history, the English Reformation. A devoted Catholic in the inner sanctum of a Protestant Empire, the young princess was a figurehead for loyal papist plotters, and a threat to those Protestants in power. Learn how Mary navigated the treacherous forces swirling around her, and discover the bold action she took to become the first English queen to reign supreme.

Episode Overview: In 1553, Mary Tudor’s dying brother, King Edward VI of England, was plotting behind the scenes to remove his half-sister from the line of succession. In the midst of the English Reformation, and the wider European Protestant Reformation, the Protestant King Edward was eager to keep Mary, a loyal Catholic, from reversing his and his father Henry VIII’s precious Protestant reforms. But Mary Tudor was not having it. She was the daughter of Henry VIII and Catherine of Aragon, and she was the granddaughter of Isabella of Castile. The crown of England was hers by right of law, and she would not permit her brother or his scheming, double-dealing counselors to deprive England of its rightful heir. In this episode of Classic Influence, we’ll travel back to 16th century England and watch as Mary Tudor attempts to boldly seize the English throne, and thwart her brother’s foolhardy coup. Looking to Mary’s daring example, this episode also reveals five critical factors to consider before implementing any significantly risky, bold action plan.