Profit from the Power of Frames to Achieve Your Aims: President Franklin Roosevelt Reframes His Race for a 3rd Term 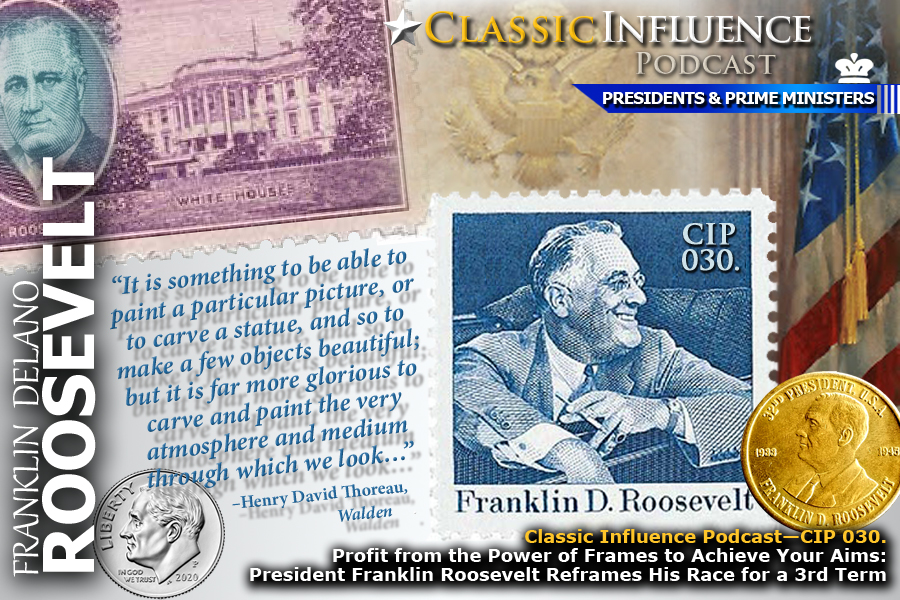 In 1940, with America on the cusp of entering World War II, President Franklin D. Roosevelt decided to run for an unprecedented third term. Despite the longstanding and deep-seated tradition—going all the way back to George Washington, who voluntarily left office after just two terms—Roosevelt, a savvy political operator and masterful communicator, found a way to frame the decision so that it not only won the support of a majority of Americans, but also helped spur the nation to meet the emerging Nazi threat. In this episode of Classic Influence, we’ll travel back to the 1940 presidential campaign, hear from President Roosevelt in his own voice, and discover the surprising power of a well-crafted frame. This episode also reveals how Harriet Tubman used reframing as part of her covert missions to rescue slaves, and how it helped her to become “the Moses of her people.” As illustrated by President Ronald Reagan to devastating effect in his own race for the White House, listen in and discover how frames can be tremendously powerful tools of influence.  Listen in now and you will also learn the 4 core steps of reframing, along with 5 strategies for generating new, more effective frames, and you will quickly discover why reframing is an indispensable tool in the pursuit of your own clear purpose and goals.