Leaders from the Bronze and Early Iron Age

King Narmer was the first known leader (pharaoh) of Ancient Egypt and is believed to be the founder of Egypt’s first dynasty. Some scholars credit Narmer with uniting the peoples of Upper Egypt and Lower Egypt.

Legend has it that Fu Hsi was the very first Chinese emperor, ruling in the 29th century B.C. Fu Hsi is believed to be the author of the I Ching, the oldest and most revered book of Chinese wisdom.

The Yellow Emperor was an apocryphal figure in ancient China. He was first among the Five Emperors and is widely considered to be the earliest ancestor of the Chinese people. He is credited with a number of early inventions—including boats, clothing, medicine, math, law and writing. He is also believed to be the originator of a strong, centralized state. When he grew old and his empire began to falter he is reported to have said: “My fault is want of moderation. The misery I suffer comes from over-attention to my own self, and the troubles of the Empire from over-regulation in everything.”

Gilgamesh was the great legendary hero and king of Uruk. He is known primarily through the Epic of Gilgamesh, one of the earliest known works of Mesopotamian literature. Gilgamesh was also known as a great builder. He is often remembered for his friendship with a wild man from the woods and for his quest for immortality.

Sargon the Great was an ancient ruler of Mesopotamia most famous for conquering the Sumerian city-states. He was also known as a great military leader, tactician and strategist. Legend has it that Sargon was discovered as an infant floating in a basket on a river. From his humble beginnings, he came to build and lead one of ancient history’s greatest empires.

Abraham was a great propphet, central to the Abrahamic religions—Judaism, Christianity and Islam—who is believed to be a forefather of both Jesus (through Isaac) and Muhammad (through Ishmael). Abraham is often remembered for being a “friend of God” and for his remarkable faith (he was prepared to sacrifice his beloved son, Isaac, until God sent an angel to stop him).

Hammurabi was the first king of the Babylonian Dynasty. He began as a successful military leader, but is most famous for establishing the first set of recorded laws, known as Hammurabi’s Code.

Moses was a great leader and prophet who was responsible for leading the Israelites out of slavery in Egypt and into the “Promised Land.” He is a central figure in Judaism, Christianity and Islam. According to a number of sacred religious texts, God revealed His teachings to Moses on Mount Sinai as the Ten Commandments around 1200 B.C.

Queen Hatsheput was the first great woman in recorded history and one of the most successful, longest reigning pharaohs in Egypt. She is remembered for her peaceful reign, numerous successful trade expeditions, and for her prolific building projects.

Tutankhamun ascended the throne in 1333 B.C. while still a youth (believed to be about 9 or 10 years old). His reign lasted only 10 years and was dominated by his powerful advisors. The most significant aspect of his reign was his rejection of his father’s (Akhenaten) worhsip of the god Aten and his restoration of the practice of worshipping the god Amun. Tutankhamun also initiated several building projects and worked to improve relations with neighboring kingdoms. He is believed to be the product of incest and likely died of related complications that led to his fall. His tomb was discovered nearly intact by Howard Carter in 1922. Today, Tutankhamun’s burial mask (see photo) remains a symbol of ancient Egyptian leadership.

David was the second king of the nation of Israel. He was an ancestor of Jesus through both Joseph and Mary. David is usually remembered for defeating Goliath, the giant Philistine warrior. He is also the man depicted in Michelangelo’s Renaissance masterpiece, the statue of David. He was a writer and philosopher (he wrote the Book of Psalms) and is remembered as a good and virtuous king (though certainly not without fault). 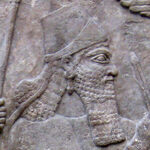 Ashurnasirpal II was the third king and a brutal conqueror of the Neo-Assyrian Empire. Along with his successful military conquests, he is also known for the consolidation of the Assyrian Empire. He is, however, also known for his unsuccessful siege of Tyre (unlike Alexander the Great in 332 B.C.). More than anything, however, Ashurnasirpal is remembered for the wickedly evil treatment of those he defeated. As he said himself,

“I built a pillar over against the city gate and I flayed all the chiefs who had revolted and I covered the pillar with their skins. Some I impaled upon the pillar on stakes and others I bound to stakes round the pillar. I cut the limbs off the officers who had rebelled. Many captives I burned with fire and many I took as living captives. From some I cut off their noses, their ears, and their fingers, of many I put out their eyes. I made one pillar of the living and another of heads and I bound their heads to tree trunks round about the city. Their young men and maidens I consumed with fire. The rest of their warriors I consumed with thirst in the desert of the Euphrates.” 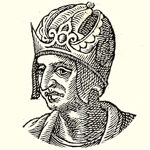 Hoshea was the last of the 19 kings of the Israelite Kingdom of Israel. 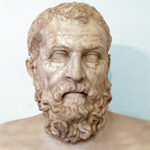 Solon was an Athenian statesman, lawmaker and poet. He is often credited as the founder of Athenian democracy. The name Solon means “wise lawmaker,” and Solon more than lived up to the name with his efforts to fight against the tyranny of Athenian leaders, and political and moral decline in ancient Athens.

Cyrus II was the founder of the Persian Empire. Cyrus was a great conquerer, but he is most remembered for uniting different tribes (the Medes and the Persians) and for his religious tolerance and for his magnanimity and generosity toward those he conquered.

Cimon was an Athenian statesman and general in mid-5th century Greece. Cimon’s effort in helping to create the Athenian maritime empire following Xerxes I’s failed invasion of Greece in 480–479 B.C. was vital to their success. Cimon was commander of the Greek forces at the Battle of the Eurymedon which ended with the destruction of both the Persian army and their naval fleet in 466 B.C.

Leaders from the Middle Ages (c. 2nd to 15th century)

Constantine was the first Roman Emperor to convert to Christianity. He is widely remembered for issuing the Edict of Milan, which helped to promote religious tolerance for all religions throughout the Roman empire. Constantine was also a fierece military general. He founded the city, now known as Constantinople, when he moved the capital of Rome to the east.

Attila was the king and military leader of the Huns, a group of Eurasian nomadic barbarians known for spreading terror throughout Europe and sacking Roman cities at will. To the Romans, Attila was the “Scourge of God;” a brutal, bloodthirsty and barbaric ruler who would stop at nothing to satisfy his lust for land, booty and power.

Leaders from the Early Middle Ages

Justinian I “Justinian the Great”

Khosrau was the last Sasanian Shah (king) of Iran.

Charlemagne was King of the Franks and the Lombards and, in 800, he was crowned as the Emperor of Rome by Pope Leo III. He is often remembered for the size of his empire, which covered the majority of western Europe, and for enthusiastically promoting both Christianity and scholarship. He is also often remembered for his many wars alongside the revival of learning and culture. He could be magnanimous toward those he conquered. Today, he is often remembered as the Father of Europe. 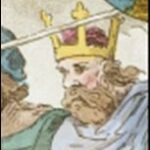 Alfred the Great was king of the Anglo-Saxons from 886 to 899. When he first acceded to the throne of Wessex in April of 1871 he struggled against Viking invasions for several years.

Leaders from the High Middle Ages

Sir William Wallace was a knight and revolutionary leader in the Kingdom of Scotland who attempted to prevent Scotland from losing her independence to England. Wallace led an uprising against the English on September 11, 1297 and defeated a much larger, superior English army at the Battle of Stirling Bridge. Wallace soon emerged as the Guardian of Scotland. Wallace was later defeated and eventually captured by the English. Condemned of treason and acts of war, Wallace was hanged, disemboweled and quartered. Undeterred by England’s victory, the memory of Wallace continued to inspire the Scottish people who kept fighting and eventually won back their independence.

Joan of Arc, a heroine of France, was a young French peasant who led the French army against the English, securing many key triumphs during the Hundred Years’ War. After being burned at the stake for heresy, Joan of Arc was eventually declared a saint by the Roman Catholic church in 1920.

Leaders from the Age of Discover, Age of Exploration

Leaders from the Reformation

Leaders from the Age of Reason (Enlightenment)

Leaders from the Age of Revolution

Leaders from the Atomic Age

Leaders from the Sixties

Leaders from the Cold War Era

Leaders from the Space Age

Leaders from the Information Age